Hi friends ..How are u all.. I am back after a long vacation in our Gods Own Country ..  I tried making achappam there  and it came it really well..So thought of sharing the recipe with u all ..

All Purpose Flour(Maida)- less than 1/4 cup

In this recipe we need no roast flour .. U can soak pacha ari for 3-4 hours ..Then wash well ,drain them ..

In a mixer grind to fine power and sift through a sieve .. U will get fine flour ..2 cup of rice will be enough i think .. I did this recipe in kerala ..so there I took 4 glass from one kg flour ..Will try here in Dubai  and tell u how much rice should be needed..

Take another bowl and pour the egg and beat well ..

Add this egg mix to that flour+coconut milk mixture ..Mix well with out any lumps..

Then add sugar and salt..If u want u can add this mix in a mixer and just whip for few second to get a uniform batter .. 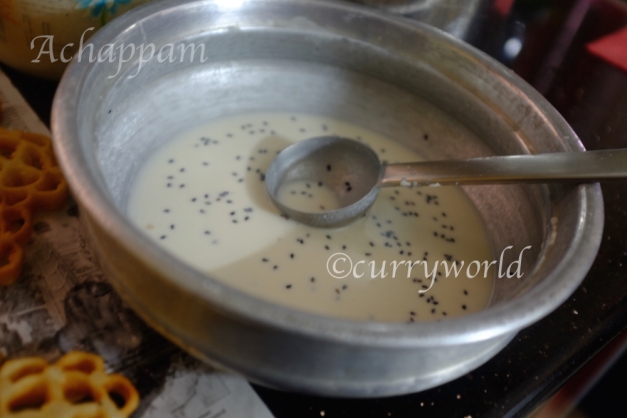 Then add sesame seeds and mix well .. Dont add too much sugar coz it will affect the shape ..

And if we add too much egg ,the achappam will smell more eggy..

So close the bowl and  keep this mix for 30 minutes undisturbed ..

Then take a small bowl and pour two ladle of batter ..

Before that take a kadai and pour oil and allow to heat ..

Take the mould(achu) here i used non stick (its really easy to use, ,i bought it from irinjalakuda ,cost only 175 rs ) wash it and wipe all the water  and dip the mould in to the oil and allow to heat..

And dip the mould in to the oil and shake little bit so tht it will drop in to the oil ..(it will detach itself but if u  find difficulty then can use a fork )

U can do 2 more achappam like this way ,after making 3 mostly ,the mould would have lost its heat ,so the batter wont stick to the mould ..

So after making 2-3 achappam ,again dip the mould in to the hot oil again for few seconds ..

Mean while turn the achappam which are in the oil and when it become light golden colour take it from and keep them in a kitchen tissue ..

So the tasty and easy achappam is ready .. Still if u have any doubt plz ask me ..